Ever since Google made the shock announcement- the news that they were killing Google Reader, all the world's bloggers, journalists and techies have been looking for that perfect alternative. For many, that alternative is feedly.

An RSS reader is, in my view at least, one of the most important tools in any journalist's, blogger's, social media consultant's or technology person's tool kit. It enables us to subscribe to the content of any blog or website and to keep up to date with their latest articles and news. It also allows you to connect many services together- for example post from a blog to Twitter. That's because RSS feeds are very easy to work with.

Despite the likes of Twitter, Facebook and Google+ doing their best to strangle RSS (none of them offer RSS feeds), RSS is still valued by many- even though many people still haven't heard of the technology.

The guys at feedly have gone out their way to effectively build a clone of Google Reader's back end (or API), so that many apps that worked with Google Reader, can now work with feedly. There has been one huge problem for me, however, in that it was impossible for me to link my saved items to another app. A while back I posted an article on my blog on how to keep up to date with the latest tech and social media news- in which I described Google Reader as my central hub. My way of working was to highlight an article I found interesting (by starring it in Google Reader). Then, using the fantastic app IFTTT (If This Then That), I could then back up the article to Evernote and Pinboard or add to offline reading app, Pocket, as well as share with my contacts using the scheduling tool Buffer.

With Google Reader shutting down, I was starting to worry that my whole way of working was about to crumble. But, just a few hours ago, there was an announcement from IFTTT that was music to my ears! IFTTT has added a feedly channel.

Here is why you should be excited too...

I scan down all the articles in feedly and when I spot an article I want to read later, want to archive it or want to share it with others, I click the "save for later" icon. When I do this I can set up some IFTTT recipes which can do all of this work for me.

Here are some of my recipes...

1. Add all your Saved Articles to Evernote 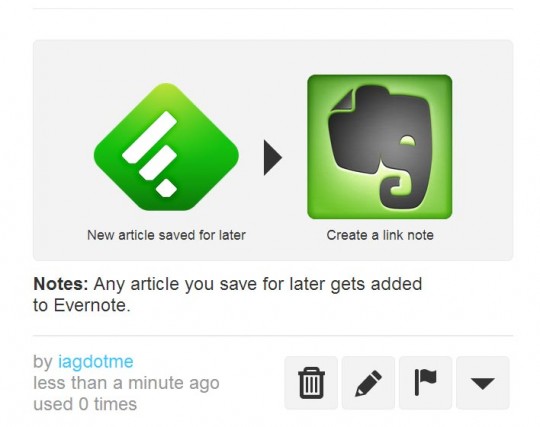 Whenever I save an article in feedly, it automatically gets added to Evernote. This way, I can have it referenced for later, even if the site goes down or the article gets removed. I find it invaluable when researching for a Seriously Social News Podcast episode.

2. Add all your Saved Articles to your Social Networks using Buffer 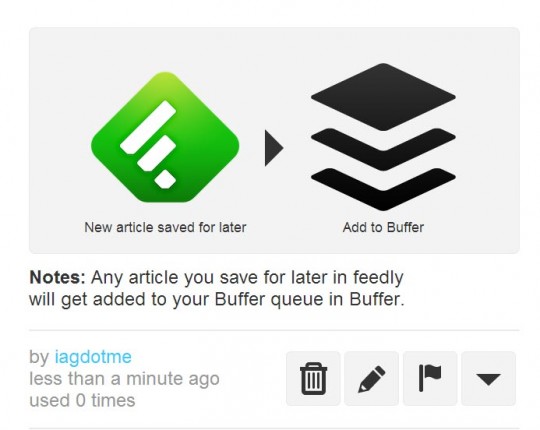 I love scheduling app, Buffer- it allows you to post to multiple social networks at different times throughout the day and week. I know Hootsuite has a similar service, but with Buffer it is so easy, and it integrates with one of my 10 Must Have Social Media Tools for Small Businesses, the url shortener bit.ly. Whenever I save an article for later in feedly, it gets added to my Buffer queue for Twitter. Now all my favourite articles get shared throughout the day to my Twitter followers. That might sound slightly controversial- but these are articles that I know the majority of my followers will be interesting in- I am delivering quality content to my followers. I have become a content curator!

5. Archive your Saved Articles in a Google Spreadsheet 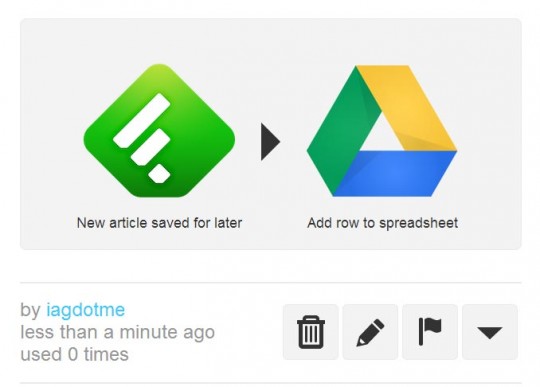 Are you a spreadsheet junkie? I know many people that are! Did you know that you can also backup all your saved articles in feedly to a speadsheet? You can with feedly. I believe all businesses (and in fact personal users too) should be archiving their social media channels as well as all their data. You never know when you will need to put your finger on that certain article or tweet. With this IFTTT recipe you can now append an article you saved in feedly to a Google Docs spreadsheet. It will then be backed up and easily accessible from Google Drive. I've relied on this many times as a way of easily sifting through articles.

So there you go, 5 great ways to turbo boost your RSS feeds using feedly and IFTTT. That's just 5- there are many more that I could mention- but that's what the comments are for. I'd love to know your thoughts- let me know!

Lovely Article! Thanks for Posting.

This is great blog!I love that you added very useful information.

It’s really helpful. Thanks for this amazing article.

Ian – Great tip – BUT cannot get hold of the original URL of a FEEDLY article. Keep getting the IFTT shortened version in GOOGLE Docs

Great post, loved it. Thanks a lot. Feedly rocks never heard of ifttt will give it a try and visit your blog regularly

Ian, was just wondering about using IFTTT, especially as a programmer it goes with the way my brain works somehow. It also seems to help get organised a lot better. I think I will be using that with Evernote!! great tips

Thanks, Ian. Let me know if you use any of them. I can’t tell you how relieved I was when the announcement happened today!