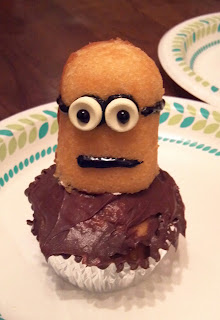 Despicable Me Minion at work
stealing your Twitter login

Some of you readers have made it clear that you are small business owners and don't have time for all that "security" balderdash where some guy like me is telling you to watch out for this scam or that scam. Well too bad, pal.

If you have a Twitter following, you might want to read this. Otherwise you could lose all your followers.

There are scammers out there looking to gain access to your Twitter account so they can spam your followers by schlepping products like timeshare condos or Ronco Automatic Glass Frosters or used copies of Richard Simmons' Deal-a-meal videos or even tickets to that upcoming Neil Diamond concert you've been dying to attend yourself (admit it). This is probably a reaction from all the spammers who no longer can get anyone to transfer them money anymore. Anyway, not only is this not what you want for your followers, but

Most of your followers won't know it's not you sending this garbage and they'll un-follow you.

If they un-follow you, that will reverse all the hard work you put in to gain them as followers in the first place. Some of you who follow me at @ThoughtReach have huge numbers of your own followers, so you should pay attention.

Here's how the scam works

You get a curious tweet directed at you from one of your followers. It might look like this one that arrived in my inbox while I was minding my own business and innocently grinding some Fair Trade espresso beans in my $19 Boden grinder. 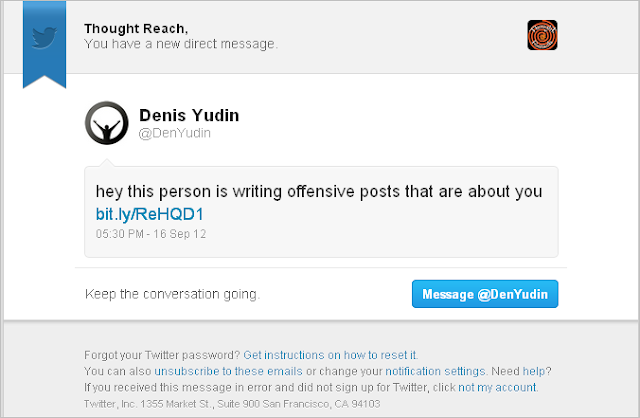 The Twitter scam bait: "Hey, this person is writing offensive posts that are about you"

Now to be fair, for all I know, this guy's Twitter account could have been hacked and was used to try to hack into mine, so if that's the case, sorry. Don't go off yelling at me in the comment section below. Anyway, if you were to click on the shortlink in that tweet, you'd be forwarded to this webpage: 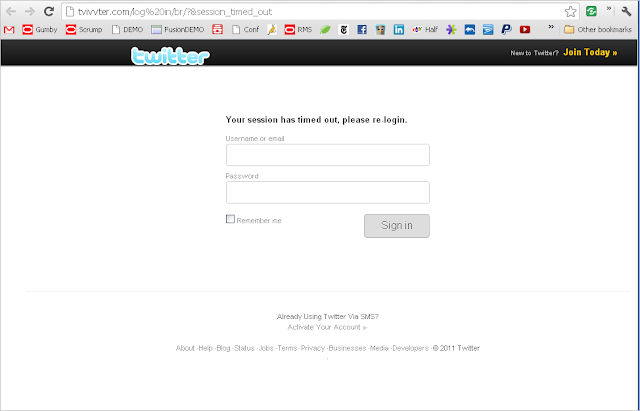 Take a look at the URL. If you can't read it, it says "tvivtter.com" which looks suspiciously like "twitter.com"

But, take a close look at the URL. It looks like it says twitter.com, but instead it says tvivtter.com. We're not in Kansas anymore, Toto. Had I entered my login credentials to Twitter on this webpage, which is owned by the scammer, he would have acquired my Twitter login and shortly thereafter, my followers would be wondering why I was tweeting them ads for "Ronco Spray-paint-the-bald-away". So just watch out. As a business owner, you may not have time to watch for every security loophole, but you really don't have time to clean up this smashed-Hostess-Twinkie-of-a-mess.

Have you been a victim yourself? Let us know in the comments. 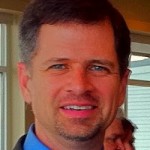 Nate Goodman (@ThoughtReach) is an email software designer with over 11 years in the email marketing, social media, and CRM space. Nate is known for two things: sipping Fair Trade coffee all day long and not being able to keep a straight face after playing a practical joke on his co-workers. Nate authors the Thought Reach blog about email and social media topics.

This would have been a meaningful post but the careless branding branding of an entire nation as scammers reveals malicious intent. No doubt, we have scammers in Nigeria and that’s not something to be proud of. But to generalise an issue like this and attribute it to Nigerian scammers simply doesn’t make sense. Does it?

Hi Philip, Thanks for your comment. You make a very good point. I don’t think this was what Nate meant at all, but I can see how it could be perceived.
Unfortunately, there is a type of spam that has been called rightly or wrongly “Nigerian spam” – whether it’s originated in Nigeria or not. But certainly only a small proportion of spam will have originated from Nigeria from my understanding. Sorry for any offence caused. I’ll look at editing the text. Hope all is well in Nigeria! Ian

It’s happened to me, from both sides of the equation. Whenever someone’s breached my account this way, someone’s always beem kind enough to tell me, and I’ve paid that forward whenever I see someone else’s account possibly compromised. I haven’t lost any followers because of this. So I guess it’s who your followers are as people that counts in the end.

Sorry to hear it happened to you, Mike. It sounds like a nightmare! Thankfully someone was nice enough to tell you. It reminds me, I really should try and take the time to do that. It’s easy to assume that the person sending out the spam is just a spammer, but they could well be someone who has been hacked.

In every case where the contact has come through a DM that I have seen, the sender is an innocent party – but I’m fairly careful who I follow and report spammers immediately. It’s worth remembering that you can’t be DM’d unless they have followed you AND you have followed them – so if they were a spammer, it should have been obvious from a superficial inspection of their twitter account. Oh, and if in doubt – wait 12-24 hours. If their account hasn’t been suspended by then, it’s probably legit.

I did not click on any of such link, but I got the message that my account was suspended (for whatever reason, but I don’t know what went wrong). Now I can tweet again on that account, but I’ve lost all my followers and according to my account I am not following anyone anymore…

I feel your pain! In fact I have had two of my Twitter accounts suspended in the past week (not my main ones thankfully). Twitter seem to be cracking down on bogus accounts but it has meant that legitimate accounts have been suspended incorrectly. In my case no reason had been given. I checked my account to see if it had been hacked or if there were any 3rd party apps that had gone rogue. I would recommend doing that- just go to your account and check your apps. Revoke the permissions for any you don’t need or recognise. Also check for any suspicious activity. The other question to ask yourself is have you followed and unfollowed a large number people recently? Twitter have strict rules on what you can’t do here- although there isn’t a specific amount that could get you banned. In my case I had not done anything against Twitter’s terms. I wondered whether a number of people had reported me incorrectly for spam and so Twitter had automatically banned me. The good news (if you feel the suspension is wrong) is that you can appeal the decision. Just go to this page to read the blurb… Read more »

I virtually ignore my DM until recently. I used to get those “someone’s posting bad pictures about you” or someone’s saying bad things about you because my attitude is “who cares” and I laughed while I deleted it. I do laugh it off as scamming nonsense but there are a lot of people who really fall for it.

Thanks for your comment. Like you I pretty much ignore Twitter DMs because of all of this. It is annoying because sometimes I lose the odd legitimate DM amongst the sea of spam. The wording of the scams tend to have bad grammar or not the kind of wording my friends or followers would use. However it does seem to be the case that many people fall for the scam- not just people- brands too!

Yeah, isn’t DM a pain? Seems like a lot of spam.

I saw one of those in my inbox as well! I used to get so much gunk in there, so luckily didn’t bother with it; just delete, and done! Pretty sneaky approach, eh? Great post, Nate! Cheers, Kris

Thanks, Kris for your comment. I get so many of these every day, and I just ignore them. To be honest I get too many to bother deleting. It worries me why so many people fall for it, but as the scammers improve their wording it’s likely that the amount of people that click on the links increases. I hope this post by Nate helps to remove the amount of times that happens!

Kris, many thanks. There’s always a new sneaky approach. Not looking forward to whatever the next one is!

[…] is cur­rently far too easy to get hacked using sophis­ti­cated phish­ing tech­niques which can har­vest your Twit­ter user­name and pass­word. It’s def­i­nitely a good idea to […]